A Study in Scarlet was Arthur Conan Doyle’s first novel, written in 1887, and it introduced us all to the brilliant detective, Sherlock Holmes, and his new friend, Dr. Watson. I really enjoyed this book, and look forward to reading more of these fun mysteries, having already bought another volume of ACD’s Sherlock Holmes stories.

“There’s the scarlet thread of murder running through the colourless skein of life and our duty is to unravel it, and isolate it, and expose every inch of it.”
. 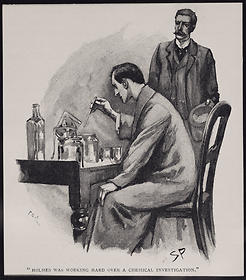 In this first Holmes novel, the murders happen in the first part of the book, and a flashback explaining the background for those murders takes up the second half of the book. It was this flashback that caused a bit of controversy when the book was published. The two murders, committed as acts of revenge, involved Mormonism and polygamy, two hot topics of that time period. The fictional portrayal of these characters really bothered the Mormons, who felt that ACD was just another Mormon-hater. They never forgave him for it.

Even though I grew up in Salt Lake City, I didn’t have a problem with that part of the story because it all seemed very fictionalized and exaggerated to me. It was evident to me that ACD hadn’t done a lot of in-depth research for this book, but that wasn’t the point. The somewhat fantastical format of the novel was very much in vogue at that time, so I think ACD might have assumed that everyone would understand that it was just a story. The Mormons didn’t and were quite offended.

There’s a very interesting article about all of this, published in the Salt Lake Tribune in 1994, that tells about the reaction of the Mormons, and also tells about a visit Sir Arthur Conan Doyle and his wife made to Utah many years after the book was published. His reception there was lukewarm. 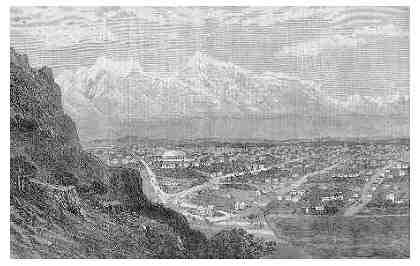 As a Salt Lake City girl, there was one part of the story that did bother me. It was the geography of the tale. ACD definitely did not consult an atlas when he wrote it, so his landscapes were completely fictional, with the Rio Grande running near SLC and the Sierra Nevada Mountains right there on the edge of town. Not! This played havoc with my own inner landscapes of that area. But that, too, I felt was part of the sensational style of the early novels of this genre, and a product of the times.

I wasn’t expecting those (fun for me) historical experiences when I picked out this book to read for Carl’s R.I.P.II Challenge. I just wanted to read the book that introduced Sherlock Holmes and Dr. Watson to the world. It was a very enjoyable read!

13 thoughts on “A Study in Scarlet”