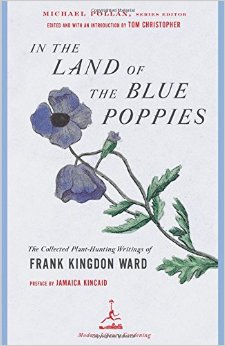 Reading about gardens and gardening has become an enjoyable focus in my life as the days shorten and I spend less time outdoors in my own garden. While searching through the gardening section of Powell’s bookshop recently, I discovered a fascinating little book, In the Land of the Blue Poppies: The Collected Plant-Hunting Writings of Frank Kingdon Ward. I brought it home and was immediately captured by the story of this passionate naturalist/explorer and his plant hunting expeditions in the Himalaya.

Frank Kingdon Ward was one of the great plant hunters of the early  20th century, and he was also a great explorer and adventurer…

“.  .  . travel had bitten too deeply into my soul, and I soon began to feel restless again, so that when after four months of civilised life something better turned up, I accepted with alacrity.  This was none other than the chance of plant-collecting on the Tibetan border of Yunnan, and though I had extremely vague ideas about the country, and the method of procedure, I had mentally decided to undertake the mission before I had finished reading the letter in which the offer was set forth.”

He was the son of a botanist and trained as a botanist himself. When plant hunting became his career, he searched for the beautiful and unusual, and brought back from his travels many plants new to England that have become very familiar in gardens throughout the world today. This quote gives us a glimpse into his patient, methodical, dedicated working life as a plant hunter:

I wished to try and collect seeds of the dwarf Iris which I had failed to get at Modung. I soon satisfied myself that all the Iris capsules were empty. Nevertheless, I believed that with patience I might find the seeds scattered in the earth close to the plants, wherever they grew thickly. And so it proved. On bare dusty slopes facing south I managed to pickup a few hundred seeds. It was slow work, but by devoting two hours a day to it, one in the morning and one in the afternoon, lying full length and going through the dust and debris carefully, my efforts were crowned with success. Such is intensive seed collecting!

Although the Blue Poppy (Meconopsis speciosa) had already been discovered by another plant hunter shortly before his own discovery of that unique and beautiful flower, he is forever associated with it. Two other gorgeous and unique flowers he discovered and named were the Rhododendron wardii var. puralbum and a lily (Siroi lilium). 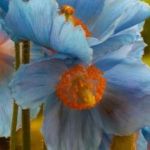 Frank Kingdon Ward was one of the great plant hunters of the time, but he was also a great explorer, sharing much of his experience and knowledge-gained about a remote part of the world by writing many books about his expeditions and his interactions with the people he met. I loved one particular story about his first experience at crossing over a deep gorge on a bamboo rope “zip-line” bridge. His description was thrilling to read, especially because I had read that he was afraid of heights!

“Let go!” and at the word I was whirled into space. Whiz! a rush of air, a catch of the breath, a smell of something burning–the rope gets very hot– the hum of the slider over the twisted strands, a snap-view of the muddy river foaming below, and I was slowing down where the rope sagged at the other end. It was all over in a moment, and pulling myself up the few remaining feet to the platform, I untied and stood up on the opposite bank. After that first experience there was nothing I enjoyed so much as a trip across a rope bridge.. 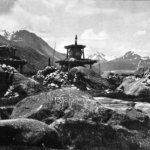 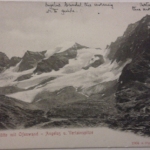 This little book was a fascinating look into the life and work of one of the great horticulture explorers. It was a book that revealed one man’s passion for flowers and plants of all kinds, and for a life of discovery and excitement.

To learn more about Frank Kingdon Ward, visit the links below.