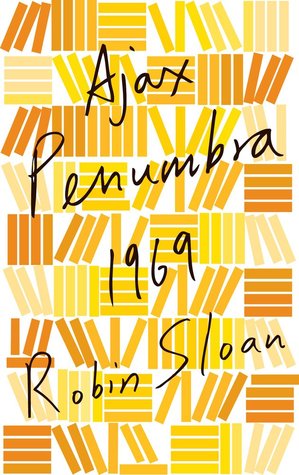 “Shortest book I read in 2017” is the prompt for day 2 of the “All the Books of 2017” challenge hosted by @annreads on Instagram. I looked closely at my list of books read so far in 2017 and found that the book I posted about yesterday, We Should All Be Feminists, was actually the shortest one I read this year. So instead, I am posting about the second shortest book.

Ajax Penumbra 1969, by Robin Sloan, is the prequel to the very popular Mr. Penumbra’s 24- Bookstore, a book which has been on my TBR list for years! But when I realized there was a prequel, I decided to read that first, and then the novel. I enjoyed both books, but actually liked the prequel better.  I think the reason for that is that 1969 was a very important year in my own life — my husband and I got married in 1969!  So I got a real kick out of the time setting of this book, as well as the location setting — 1969 in San Francisco. We were there!

These are both books for book lovers, and both are very enjoyable reads.