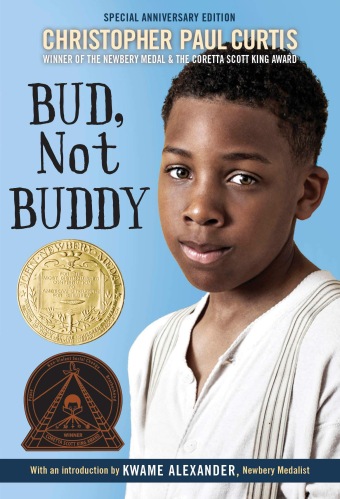 Bud, Not Buddy, by Christopher Paul Curtis, is an award winning book for young people. It won both the Newbery Medal and the Coretta Scott King Award. It’s a wonderful, heart-warming book, and I just wanted to take Bud (not Buddy) home with me.

“A bud is a flower-to-be. A flower-in-waiting. Waiting for just the right warmth and care to open up. It’s a little fist of love waiting to unfold and be seen by the world. And that’s you.”

— This is what Bud’s mother told him about his name, and is why he always introduces himself as “Bud, not Buddy.”

Bud is an orphan, having lost his mother four years ago, and not knowing who his father was, he was placed in an orphanage. The time was during the depression; the place was Flint, Michigan; and an orphanage during that time was a miserable place to be. After being in the orphanage, and then experiencing an abusive foster home, Bud ran away and decided to try to find out who his father was from the clues his mother left behind. He carried those clues with him everywhere in a tattered old suitcase tied up with twine.

His first stop after running away was the library. The librarian had always been very kind to him, and he knew she would understand and help him. However, he discovered that she had gotten married and moved away, but the new librarian took him underwing and helped him figure out a walking route to Grand Rapids, where he thought his father might be, based on his mother’s clues.

Shucks, this is one of the bad things about talking to librarians, I asked one question and already she had us digging through three different books.

The twists and turns of how he finally got to a destination in Grand Rapids were fun to read, and quite adventurous. It was not easy for anyone to travel during that period of time, and it was especially dangerous for a young black boy to be traveling alone. But he met some Helpers along the way, and what awaited him in Grand Rapids was a new life, but not without twists and turns first.

If you didn’t have a real good imagination you’d probably think those noises were the sounds of some kid blowing a horn for the first time, but I knew better than that. I could tell those were the squeaks and squawks of one door closing and another one opening.

In the Afterword to the book, the author, Christopher Paul Curtis, talked about how he learned about this period of time and how he based some of the characters on his own grandfathers. He had a wonderful piece of advice for his readers:

Much of what I discovered about the depression I learned through research in books, which is a shame—I didn’t take advantage of the family history that surrounded me for many years. I’m afraid that when I was younger and my grandparents and parents would start to talk about their lives during the depression, my eyes would glaze over and I’d think, “Oh, no, not those boring tall tales again!” and I’d find the most convenient excuse I could to get away from them. Now I feel a real sorrow when I think of all the knowledge, wisdom and stories that have been forever lost with the deaths of my grandparents. Be smarter than I was: Go talk to Grandma and Grandpa, Mom and Dad and other relatives and friends. Discover and remember what they have to say about what they learned growing up. By keeping their stories alive you make them, and yourself, immortal.

This is such an enjoyable book to read, especially during Black History Month, which this year focuses on families. Read it with your family, read it to your middle grade students, or read it by yourself on a snowy afternoon. It will warm your heart. 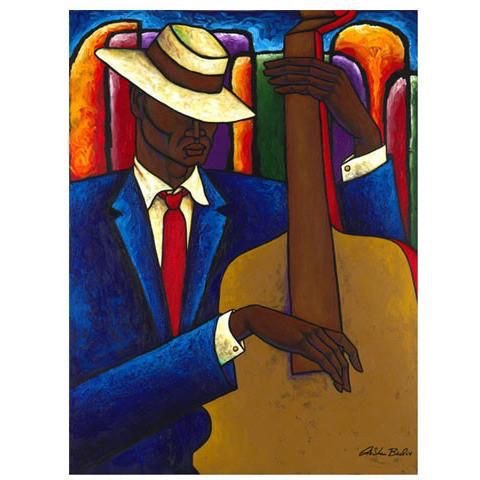 2 thoughts on “Bud, Not Buddy”