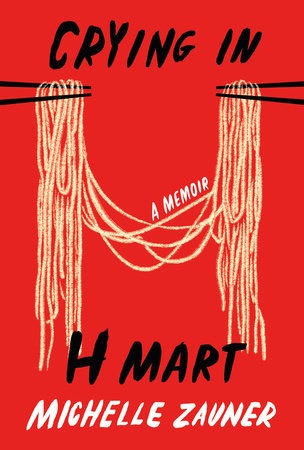 This week I’ve been listening to the audiobook, Crying in H Mart, by Michelle Zauner, also narrated by the author. It’s been a very moving experience which has touched my heart in many different ways.

It is a memoir of a young woman, a talented musician (her band is called Japanese Breakfast) and the only daughter of a Korean mother and an American father. It is the story of her growing up between two cultures, of her relationship with her mother, and of the loss of her mother to cancer.  It is a very honest and introspective book as she described the struggles between mother and teenage daughter, mother and young adult daughter, and the struggle to establish her own identity. It is a story of growth and grief, and of love and loss.

Her experiences were both unique and universal. I identified with many of the struggles of her teenage years (from my perspective as both a daughter and a mother), and I was fascinated with her cultural and language struggles with extended family. Michelle had just reached young adulthood when her mother was diagnosed with cancer. It was just at the time when her relationship with her mother began to settle into a more adult closeness after the struggles of the teenage years. The descriptions of her mother’s decline and death were heart wrenching, and I found myself in tears numerous times. I couldn’t help but remember and compare my own mother’s death three years ago, and appreciate once again what a kind death my mother had in comparison to the death of Michelle’s mother to the ravages of cancer with it’s prolonged decline. I just wanted to reach out and hug her and tell her how much I admire her honesty and the courage she showed in dealing with that devastating experience.

Michelle’s writing is beautiful. She is not only a talented musician, but is a very talented writer. I am hoping she continues to tell stories because I will look for and read any book she writes. This book is currently on the New York Times best seller list, so there was a long wait for it at the library. But I enjoyed listening to her own voice narrating it, so I highly recommend listening to the audiobook.

A favorite quote from the book:

I’ve just never met someone like you,” as if I were a stranger from another town or an eccentric guest accompanying a mutual friend to a dinner party. It was a strange thought to hear from the mouth of the woman who had birthed and raised me, with whom I shared a home for eighteen years, someone who was half me. My mother had struggled to understand me just as I struggled to understand her. Thrown as we were on opposite sides of a fault line—generational, cultural, linguistic—we wandered lost without a reference point, each of us unintelligible to the other’s expectations, until these past few years when we had just begun to unlock the mystery, carve the psychic space to accommodate each other, appreciate the differences between us, linger in our refracted commonalities. Then, what would have been the most fruitful years of understanding were cut violently short, and I was left alone to decipher the secrets of inheritance without its key.

Food was a huge part of her relationship with her mother, so H Mart was an important part of this book. I had never heard of H Mart before, but since the author grew up in Eugene, Oregon, and the H Mart there is the one she wrote about, I thought it would be interesting to perhaps visit that particular store. In searching for it on the internet, I discovered that there are numerous stores even closer to home, so my sweet husband and I drove to Tigard yesterday morning for our first-ever shopping trip to H Mart. Yesterday’s pilgrimage won’t be our last, though, because we were thrilled with the produce and enjoyed shopping there. We came home with some wonderful baby bok choy, a fine looking napa cabbage, a variety of wonderful greens, some new instant noodles to try out, and all the regular weekly items on our shopping list.  And since Korean food was such an important part of the book, I picked up the ingredients to try a new recipe I found for Korean Noodles with Black Bean Sauce. Yum!