FIfty years ago this month, Frog and Toad Are Friends, by Arnold Lobel, was published. That book, and all his subsequent books are among my family’s all-time favorites! Frog and Toad captured our hearts, and were wonderful companions over the years. Frog and Toad are part of our family!

Happy Birthday to a wonderful book!

During this week of unspeakable horror in Syria, I found a little book at the library that shone with beauty and hope. Stepping Stones: A Refugee Family’s Journey, written by Margriet Ruurs and with illustrations created by Nizar Ali Badr, is a honest and poignant story of a Syrian family’s experience of having to leave their beloved home and country and flee for their lives. Fortunately, they find open arms and help in a new country. This book would be a wonderful teaching tool for families and classrooms to help all understand the refugee crisis worldwide. It also gives information about how one can give help during this humanitarian crisis.

from the publisher, Orca Book Publishers:

This unique picture book was inspired by the stone artwork of Syrian artist Nizar Ali Badr, discovered by chance by Canadian children’s writer Margriet Ruurs. The author was immediately impressed by the strong narrative quality of Mr. Badr’s work, and, using many of Mr. Badr’s already-created pieces, she set out to create a story about the Syrian refugee crisis. Stepping Stones tells the story of Rama and her family, who are forced to flee their once-peaceful village to escape the ravages of the civil war raging ever closer to their home. With only what they can carry on their backs, Rama and her mother, father, grandfather and brother, Sami, set out to walk to freedom in Europe. Nizar Ali Badr’s stunning stone images illustrate the story.

This bilingual children’s picture book (English and Arabic) is worth reading for the illustrations alone. The three dimensional characters, made from beach stone by Syrian artist Nizar Ali Badr, are so expressive and exquisite that they tell a story of their own. Badr conveys the plight of refugees, although he himself has never left Syria. He explains, “How could I leave the country that gave to humanity the world’s oldest writing, the cuneiform alphabet?”

What can you do to make a difference? 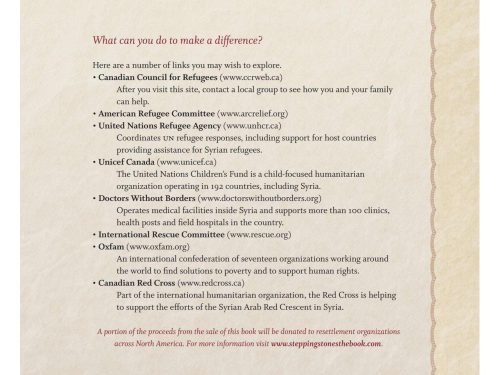 I chose this book to read for my personal challenge, “Wanderlust,” my effort to read books that are from or take place in each country of the world. This was a book about life in Syria.

One year ago, we lost Mom. After we celebrated her life, we decided that, as a family, we would continue to get together at least once each year. So my brothers and their wives, and Byron and I, all met in Salt Lake City once again last week for our first annual get-together. What a wonderful reunion!

It was nice that this first get-together was in Salt Lake City. We were able to visit Red Butte Garden and spend time at our memorial bench — our memorial now for both our parents. They both donated their bodies to the University Medical School, so we don’t have a gravesite to visit. Instead, we have a memorial bench in the rose garden of Red Butte Garden, and it couldn’t be a lovelier, more uplifting place to sit and remember them.

During the week, we also enjoyed time at the Natural History Museum, always a favorite; went on long morning walks; hiked around Silver Lake in Big Cottonwood Canyon; went out to eat at all our favorite restaurants; visited The King’s English Bookshop; and spent a lot of time reminiscing. 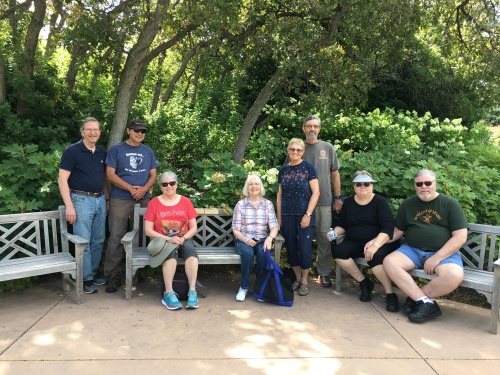 Books are always part of our discussions when we get together as a family.  We shared about books read and then, of course, some of us bought new books. Here’s a bullet list of books discussed and/or purchased during the week.

Such a fun week! Good people, good food, good books, and a beautiful location for a reunion. We also decided that next year we’ll meet on the east coast!

Early May is a special time in my family. The family often gathers to celebrate the birthdays of my brother and of my father who would have been 97 years old on this birthday. We also celebrate Mother’s Day (a little early this year) and honor our amazing Mom who is still so strong in intellect and spirit, although increasingly unsteady physically.

So our visit meant a road trip for Byron and me, which we are enjoying very much, especially after this long and confining winter. We, of course, brought our Kindles with us. When it was my turn to drive, Byron read The Dream of Reason: A History of Philosophy from the Greeks to the Renaissance, by Anthony Gottlieb.  And while he drove, I read my current mystery: Death in La Fenice, by Donna Leon.

We stopped for an overnight visit with my brother and sister-in-law, both voracious readers, so we left with this extensive list of books to read:

And when we arrived at my mother’s place, I found that she had just finished reading Girl Waits With Gun, by Amy Stewart, for her book club . I also thought you might be interested to see some of the books on her shelf so I took some photos for you. 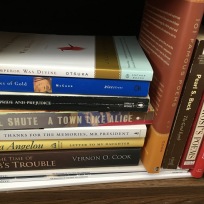 With the family together (minus one brother and sister-in-law), we talked a lot about the current state of affairs in this country and the world, but we also talked a lot about books. It’s so nice to come from a family of readers!

The Story of Civilization on my bookshelf.

When I was 16 years old my father gave me the complete set, which at that time was 9 volumes, of Will and Ariel Durant’s The Story of Civilization. I was both thrilled with and overwhelmed by the gift. I love history, as did my Dad, but 9 volumes (soon to be 10, and then eventually 11) with fine print just overwhelmed me. Although I’ve used them like an encyclopedia, looking up information needed, in all this time I’ve never read them cover to cover, although they have traveled with me through every move and have survived every purge of books in my lifetime, thus far.

You will understand, then, when I tell you why I am extremely proud of my son. In the last few years, our son, Dan, has had a long commute to work. He has made that time spent in the car both productive and bearable by listening to audiobooks. He has just completed a huge project listening to the complete unabridged set of the 11 volumes of The Story of Civilization!  If I added correctly, that’s over 424 hours of listening time! But it’s more than that because along the way on his historical journey, he took many “side roads” and listened to much of the classic literature of the time period he was immersed in.

We have had the most wonderful and fascinating long talks with him about the different historical time periods, about the amazing people involved, about human nature and culture, and about the writing of this epic life’s work by Will Durant and his wife, Ariel. What an amazing education Dan is giving himself over the miles! I know my college professor Dad would have been incredibly proud of him, too, and they would have had amazing discussions about all that Dan has learned. The pleasure of learning is certainly a powerful gene in our family, and I’m so very proud of the self-education Dan is giving himself through his reading.

“Perhaps the cause of our contemporary pessimism is our tendency to view history as a turbulent stream of conflicts – between individuals in economic life, between groups in politics, between creeds in religion, between states in war. This is the more dramatic side of history; it captures the eye of the historian and the interest of the reader. But if we turn from that Mississippi of strife, hot with hate and dark with blood, to look upon the banks of the stream, we find quieter but more inspiring scenes: women rearing children, men building homes, peasants drawing food from the soil, artisans making the conveniences of life, statesmen sometimes organizing peace instead of war, teachers forming savages into citizens, musicians taming our hearts with harmony and rhythm, scientists patiently accumulating knowledge, philosophers groping for truth, saints suggesting the wisdom of love. History has been too often a picture of the bloody stream. The history of civilization is a record of what happened on the banks.”

Our son, Dan, reading to his son…