The Whispering Statue, by Carolyn Keene, is book #14 in the original series. All the Nancy Drew books were actually ghostwritten, and my favorite of the ghostwriters was Mildred A. Wirt Benson. She wrote the first twenty-three books in the series, and those are my favorites.

Another interesting tidbit about the early Nancy Drew books, which were originally published in the 1930s, is that they were rewritten and republished in the 1970s. The copy I read of The Whispering Statue was definitely a rewritten one from the 70s because the plot was significantly different and shorter than the earlier version, AND the word “groovy” was used two or three times in the story. That was a dead giveaway to someone very familiar with the late 60s and early 70s!!

I enjoyed rereading this mystery. It was pleasant to spend an afternoon on the porch with a fun book. My goal is to slowly reread as many of the Nancy Drew books as possible!

Once again, Nancy faces two puzzling mysteries at once! The first concerns a valuable collection of rare books that Mrs. Horace Merriam commissioned anart dealer to sell–has he swindled her instead? The second mystery revolves around the baffling theft of a beautiful marble statue. To solve both mysteries, the famous young detective disguises herself and assumes a false identity. Despite these precautions, danger stalks Nancy’s every move. An attempted kidnapping, a nearly disastrous sailboat collision, and an encounter with a dishonest sculptor are just a few of the exciting challenges that Nancy is faced with as she gathers evidence against a clever ring of art thieves.

I read this book for the RIP XIII challenge, Peril the First.

Many years ago, I read The Guernsey Literary and Potato Peel Pie Society, by Mary Ann Shaffer and Annie Barrows, and I loved it. I just reread it, knowing that I would like to see the new movie that’s been made of it, and discovered the pleasure of it all over again. I loved it even more this time around! This book really is a treasure! It is historical fiction, the story taking place during the occupation of the Channel Islands during World War II. It is written as a series of letters between the different characters, and it is absolutely delightful getting to know those characters. If you haven’t read it, you must.

January 1946: London is emerging from the shadow of the Second World War, and writer Juliet Ashton is looking for her next book subject. Who could imagine that she would find it in a letter from a man she’s never met, a native of the island of Guernsey, who has come across her name written inside a book by Charles Lamb…

As Juliet and her new correspondent exchange letters, Juliet is drawn into the world of this man and his friends  and what a wonderfully eccentric world it is. The Guernsey Literary and Potato Peel Pie Society  born as a spur-of-the-moment alibi when its members were discovered breaking curfew by the Germans occupying their island  boasts a charming, funny, deeply human cast of characters, from pig farmers to phrenologists, literature lovers all.

Juliet begins a remarkable correspondence with the society’s members, learning about their island, their taste in books, and the impact the recent German occupation has had on their lives. Captivated by their stories, she sets sail for Guernsey, and what she finds will change her forever.

Written with warmth and humor as a series of letters, this novel is a celebration of the written word in all its guises, and of finding connection in the most surprising ways.

My favorite quote from the book: 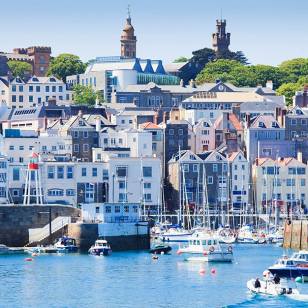