The old adage warns us never to judge a book by its cover, but I’m a real sucker for a book with a beautiful cover! Sitting on my bookshelves are numerous books I purchased because of a lovely cover. Many of them I have yet to read, but I enjoy those covers each time I search the shelves for my next read.

I thought about book covers this morning when I finished reading Fever 1793, which has a very disturbing cover–a close-up of an eye with the white of the eye colored yellow. It’s all about Yellow Fever, of course, but it was very hard for me to see that cover every time I closed the book. I should have put some kind of covering over it, the way we used to cover our textbooks in junior high with fancy paper, but it was a paperback and I didn’t think it worth that much trouble for such a short read. But it was a disturbing experience, and maybe part of the reason that I didn’t really like the book very much.

I was disappointed in the book although the back cover showed that it had received accolades and high praise from some prestigious organizations. It was voted an ALA Best Book for Young Adults; it was a Junior Library Guild Selection; it was an IRA Teachers’ Choice; and it was included in the New York Public Library’s 100 Books for Reading and Sharing. So why did I think that it was missing something?

The New York Times Book Review said it was “a gripping story about living morally under the shadow of rampant death.” It didn’t “grip” me, not like the book A Parcel of Patterns, by Jill Walsh Patton, which was also about the effect of a plague on a town, and which I couldn’t put down when I read it. The New York Times also said that “the plot rages like the epidemic itself,” but I thought the author had a difficult time connecting her plot elements. It moved fast, from plot element to plot element, but the connections between them were awkward. Unlike Tony Hillerman’s plots, the in-betweens” weren’t left to the imagination of the reader, they were just left out. The plot of Year of Wonders, by Geraldine Brooks, another plague story, “raged” much more and kept the reader riveted to the book.

So I headed back to my bookshelves this morning, looking for a beautiful cover. Here are a few books that bring joy every time I look at their covers, and which perhaps I’ll choose to read this time.

Walking in the Beauty of the World: Reflections of a Northwest Botanist, by Joseph Arnett 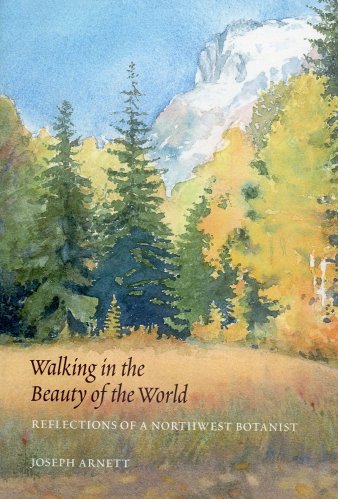 The World of Emily Carr series

1 thought on “Never Judge A Book By Its Cover”