Last night, my husband and I watched the old Japanese film, Ugetsu, a film based on two stories from the book, Tales of Moonlight and Rain, by Ueda Akinari, which I read many years ago. The film was directed by the great filmmaker, Kenji Mizoguchi, and released in 1953. It is a classic of Japanese film and a beautifully filmed, ethereal and haunting story.

from The Criterion Collection:

By the time he made Ugetsu, Kenji Mizoguchi was already an elder statesman of Japanese cinema, fiercely revered by Akira Kurosawa and other directors of a younger generation. And with this exquisite ghost story, a fatalistic wartime tragedy derived from stories by Akinari Ueda and Guy de Maupassant, he created a touchstone of his art, his long takes and sweeping camera guiding the viewer through a delirious narrative about two villagers whose pursuit of fame and fortune leads them far astray from their loyal wives. Moving between the terrestrial and the otherworldly, Ugetsu reveals essential truths about the ravages of war, the plight of women, and the pride of men.

summary of the story from Roger Ebert:

Two brothers, one consumed by greed, the other by envy. In a time when the land is savaged by marauding armies, they risk their families and their lives to pursue their obsessions. Kenji Mizoguchi’s “Ugetsu” (1953) tells their stories in one of the greatest of all films — one which, along with Kurosawa’s “Rashomon,” helped introduce Japanese cinema to Western audiences. The heroes are rough-hewn and consumed by ambition, but the film style is elegant and mysterious, and somehow we know before we are told that this is a ghost story.

We were captivated by the story and enveloped by the visual beauty of this film. It is a film experience I highly recommend.  It is available for purchase or rental from Amazon Prime, but we streamed it free-of-charge from Kanopy, the movies available for streaming through our local library system. 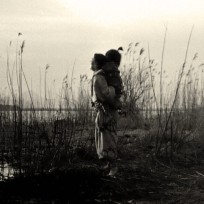 I watched this film as part of the Japanese Literature 12 Challenge hosted by Meredith at Dolce Bellezza.